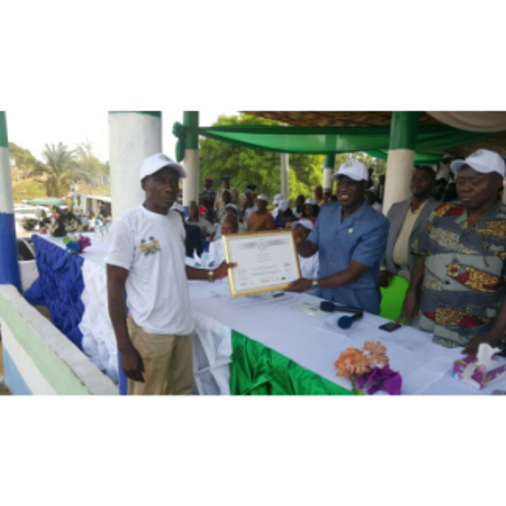 The award ceremony was held at the Kenema show field on the 21st December 2019 and was attended by the Ministry of Agriculture and Forestry, Development Partners, other stakeholders and all Works of Life.

In his remarks, the District Agricultural Officer in Kenema applauded PMB for organizing such remarkable show and emphasized on quality improvement which should be prioritized by farmers so that they compete in the international market.

The Executive Chairman, Produce Monitoring Board, Dr. James Vibbi thanked Farmers, Exporters, Development Partners, Ministry of Trade and Industry, staff of PMB and all those who contributed to make the fair a success.

He informed the gathering that PMB is a regulatory institution that promotes cost effective production, processing and marketing and the monitoring and evaluation of the prices of high produce.

He noted that the exhibition is also a platform for farmers to showcase and promote their businesses and excellent agricultural produce.

He underscored some of the objectives of the Quality Produce Fair among which are; promoting quality production and value addition in the produce sector, creating a market platform where buyers and sellers will meet and conduct business and enhancing stakeholders’ knowledge on world market quality requirements of all exportable agricultural commodities.

He encouraged farmers to add value to their produce in order to meet international standard.

Dr. Vibbi assured farmers that the institution will ensure that their concerns raised will be addressed before the 2020 produce fair.

Presenting the different categories and prizes, the Director of Produce Monitoring Board, Didan Sankoh said that the aim of the award is to motivate farmers and exporters to do more.

He informed that at the previous fair, a lot of farmers benefited, that was the reason the third quality produce fair attracted more farmers.

Mr. Sankoh assured farmers and exporters that PMB will continue conducting trainings for them in order to improve on the quality of their produce, noting that as agency responsible to monitor the exportation of produce, they will make sure that the right things are done.

In the cocoa category, the Tewoh Agriculture Farm from Kaliahun came first with a star prize of Le 15,000,000 and Dasse Cocoa Farmers from Moyamba came second with a prize of Le 10,000,000.

Another cash prices were given to winners in the Ginger farmers category where Ropolon Cahew Kambia, came first with a cash prize(Le, 5,000,000) and Added Ginger Value came second with a prize of two million, five hundred thousand Leones (Le. 2.500,000).