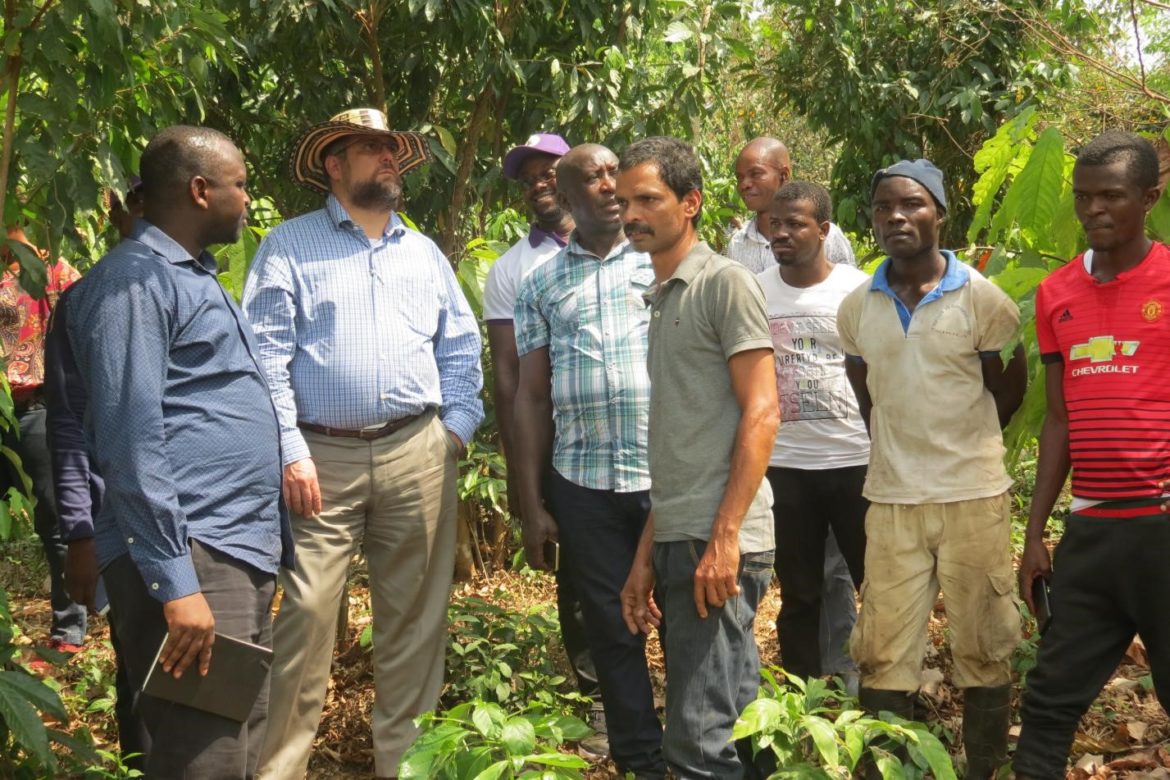 The Ambassador of Brazil to Sierra Leone, His Excellency Kaiser Araujo, and a team from the Produce Monitoring Board (PMB) led by its Executive Chairman, Dr. James Vibbi have from the 6th to the 8th March 2019 conducted a three-day practical experience tour on cocoa farms in different villages in Kenema and Kailahun Districts to get first-hand information from cocoa farmers.

Speaking to Farmer Cooperatives at PMB office in Kenema, the Ambassador, Kaiser Araujo informed them that his embassy is open to partnering with PMB and that he is keen to working with PMB to support cocoa farmers in Sierra Leone.

Giving the reason for his visit, the Ambassador informed that the Executive Chairman of PMB, Dr. James Vibbi and the Operations Coordinator, Didan Sankoh approached him on 1st March 2019 for partnership opportunity between the Brazil Embassy and PMB to help improve on the quality and quantity of cocoa production in the country, adding that at the end of the meeting with PMB, he agreed to go on this tour to different cocoa farmers in the Kenema and Kailahun Districts in the Eastern Region of Sierra Leone to get first-hand knowledge of issues of cocoa farmers.

The Ambassador reiterated that he has asked PMB to submit a project proposal to him so that he can present it to the Government of Brazil and see how they can tap in addressing some of the challenges facing cocoa farmers.

He described the request made by PMB under the astute leadership of Dr. Vibbi as timely and that he has seen visible signs of PMB’s proactiveness in developing of cocoa sector and attracting more investors to the sector.

Addressing farmers in different farms, the Executive Chairman of Produce Monitoring Board (PMB), Dr. James Vibbi noted that the mandate of PMB, among others, is to regulate, promote and improve the production, processing, and marketing of produce in order to optimize the export earnings of farmers; encourage the production of quality produce which meets international standards.

He underscored that his own action in the PMB is the vision of President Julius Maada Bio, assuring that under his leadership he will ensure that the transformation of PMB is visible in the country.

‘From the practical experience got from framers, we discovered that there are a lot of challenges in the area of improving quality, lack of scholarship in the area of under bushing, lack of pre-financing, lack of  new techniques of technology and that most of the cocoa trees are very old which need a lot of rehabilitation and replacement in order to increase yield’ he noted. Speaking on how to improve quality cocoa production in the country, Dr. Vibbi revealed that ‘PMB is presently engaging different institutions in the cocoa chain to see how to address those challenges and as an institution they are now in the process of procuring quality testing equipment like moisture meters, Magra cutter/Guillotine, sensitive scale, thermometers, hand lenses etc., establishing produce testing mini-laboratory at the PMB office in Freetown.

He went on to say that recently, he has also engaged the Chinese Ambassador to Sierra Leone where they discussed partnership potentials between the Chinese Embassy and PMB.

In their responses, the farmers said that they were very delighted to have the Brazil Ambassador visit them and their farms and expressed their thanks and appreciation to Dr. Vibbi and his new team of innovative thinkers at PMB for creating such opportunity.

The farmers explained the how they have been struggling to produce cocoa to the quantity and quality required but that they have not been able to meet the quantity and quality demands given the challenges they face with having quality enhancement equipment like fermentation boxes, solar dryers, storage facilities, etc., emphasizing that the higher the quality the more money that they will attract. The farmers also noted that most of their trees are old, but replacing them with new ones require labour and cost of labour is a huge burden on them. Engaging in Good Agricultural Practices (GAP) is also a challenge given the huge number of farmers and the limited capacity of PMB to reach out to all farmers with GAP trainings. The farmers further called on the Government through PMB to continue supporting the cocoa sector in the country as cocoa is key to them.

Speaking after the tour, the Ambassador stated that ‘The practical experience I got from farmers is that there are a lot of challenges in the cocoa production especially in the area of processing quality cocoa, pre-financing of farmers by certain exporters and lack of knowledge in the new techniques of technology in the cocoa production’ he noted, emphasizing that ‘I was so impressed to see farmers cooperatives in different cocoa farms visited, he added. The Ambassador concluded by commending Dr. Vibbi and team for being proactive and assured of his Embassy’s desire to work with PMB.