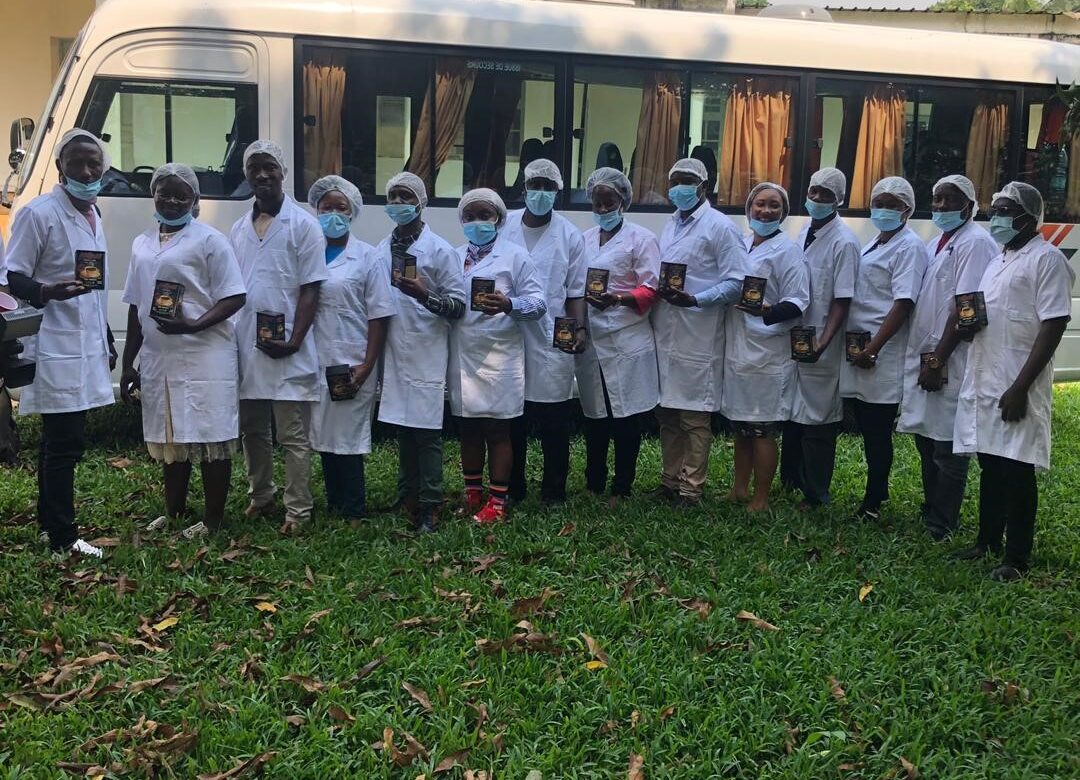 The four-day training which started from 10th– 13th January 2021 is a follow-up of a two-session training sponsored by the Centre for the promotion of imports from developing countries (CBI) of the Netherlands for the Produce Monitoring Board and counterparts in the Mano River Union basin. It is a parallel project to the Netherlands Trust Fund (NTF) IV Programme, Implemented by the International Trade Centre (ITC).

The aim of this training is to broaden the knowledge of Participants on Cocoa Quality and Sensory Assessment that will be replicated to the farmers who are the primary producers of cocoa in Sierra Leone and the Mano River countries.

The training was facilitated by Dorine Kassi, Cocoa Quality and Flavor Consultant based in Abidjan, Ivory Coast

Field visit to Mr. Ambroise N’koh, winner Cocoa of Excellence 2019 at Azaguie 50km from Abidjan. He is the Chairman of AJNEB, a Farmer Field School Program supported by the Government of Ivory Coast, having 1,500 Farmers Practicing Good Agricultural Practices (GAP). The 1,500 Farmers are shared into 24 schools. The farm is used as an agricultural Research Centre by Research Institutions and Universities in and out of the Ivory Coast. The objective of the visit was to understand detailed farm management practices in the Cacao plantation.

Mr. Amboise N’koh was pleased to receive the participants. He said his entire farm is fifty acres (50 acres) of which fifteen acres is occupied with Cacao (15 acres), Ten acres of the dwarf variety of coffee and the remaining is an Agroforestry farming system where economic timber trees are intercropped with food crops.

He added that his annual harvest is 2.5-3 Mt. of cocoa /Ha. 24 harvest per year, that is harvest is made every two weeks throughout the year.

Mr. Amboise N’koh further stated varietal composition, 70% Forastero cocoa variety, 20% Trinitario, and 10% Criola. He said several types of research have been conducted on the farm. Among them are;

Effect of Nematodes (eelworms) on cocoa production in which the suitability of nematodes on various crops was tested such as CITRUS, CAJANUS CAJAN, and BANANA.

After a conducted tour of the farm, integration of Bee in Cacao plantation training was done by Mr. Ouloto, president of Bee farmers in Ivory Coast.

The Introduction of CNRA staff members was done by Dr. Luois Ban Koffie, followed by a practical session of sensory evaluation of 14 samples sent by the Produce Monitoring Board in preparation for the Cocoa of Excellence /ICA Award 2021 edition from Sierra Leone that was transformed into Liquor at CNRA and evaluated.

Starting with Ghana and Ecuador cocoa Liquor samples as reference for the first seven samples tested.

DAY THREE: Evaluation of the Remaining samples from Sierra Leone.

Six (6) best cocoa samples were selected with an additional two as a standby in case there is an issue with any of the six samples in storage.

A visit to Choco plus beans to the Bar chocolate factory supported by an NGO M.Leone DeVitae in Grand Bassam formed part of the activities. A detailed explanation of the entire process of manufacturing Chocolate and the use of various equipment was done by the Manager.

The training was climaxed with a presentation of certificates to participants. This is the first time in the history of the Produce Monitoring Board has six Certified Cocoa Sensory and Flavor Testing Experts. This will contribute to the enhancement of quality in the Cocoa sector in Sierra Leone.