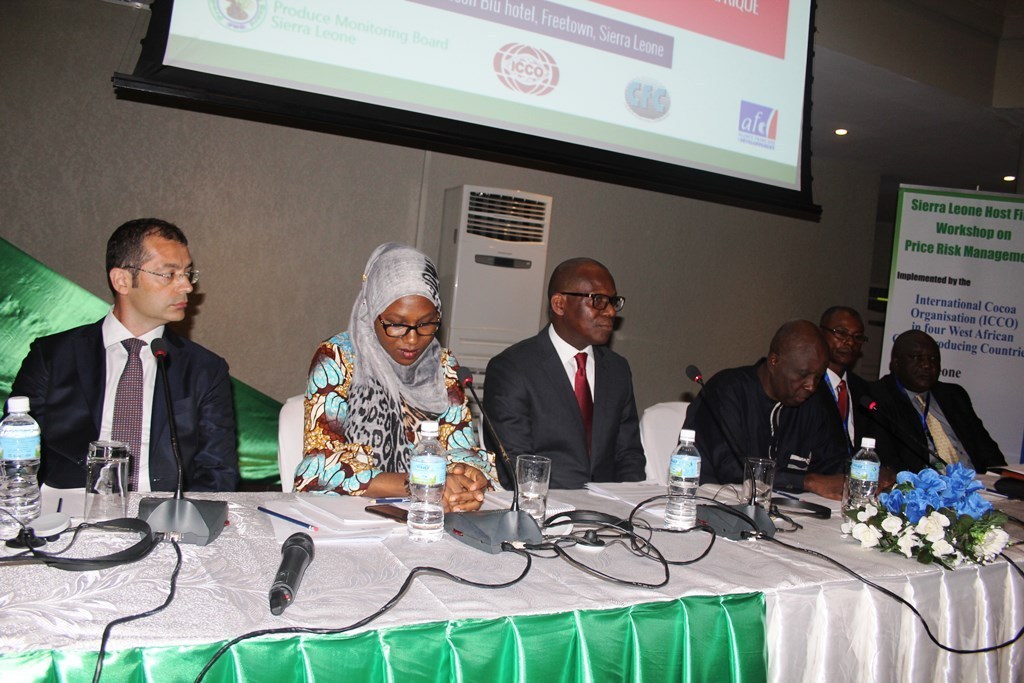 The Produce Monitoring Board in its quest to improve on the dissemination of market information and the marketing capacity of our local Producer Organizations (POs), Cooperatives and smallholder cocoa farmers to make them more responsive to the challenges of the volatile commodity market, recently hosted the Final Workshop of the Price Risk Management (PRM) Strategy for Smallholder Cocoa Farmers in Africa, on the 21st of February 2017, at the Radisson Blu Hotel in Freetown.

The project was funded by the International Cocoa Organization and the Common Fund for Commodity (CFC) for four (4) beneficiary West African cocoa producing countries-namely Sierra Leone, Nigeria, Cameroon and Togo.

The Project was divided into the following components and was implemented independently in the respective beneficiary countries:

Prior to implementing component one of the project, a Situation Analysis Survey was conducted, which laid the road map for implementation in the country. The aim of the Final Workshop was to bring together representatives from all the participating beneficiary countries in a single venue to discuss issues relating to price volatility, produce sales on discount and the development of smallholder cocoa farmers in the beneficiary countries.

The forum was also designed for participants to share their experiences (results) on the implementation of their local PRM strategy within their various entities, and to proffer measures that will empower the stakeholders, especially the smallholder cocoa farmers to mitigate the adverse consequences of any fluctuations in the world market price for cocoa.  This segment of the workshop was facilitated by the Project Manager of Twin, Suzzane Fogg.

The program was chaired by the Acting Executive Director of the Produce Monitoring Board (PMB), Mrs Haja Isatu Kabba, the keynote address of the occasion was given by the Honourable Minster of Trade and Industry (MTI), Captain Momodu Alieu Pat-Sow and the Guest of Honour of the workshop was the Executive Director of the International Cocoa Organization (ICCO), Dr. Jean Marc Anga. The Chief Director MTI, Mr. Marywhether C. Thompson read the speech sent by the Common Fund for Commodities (CFC), as the organization was not represented in the workshop.

The Honourable Minister, in his keynote address emphasized the ministry’s role in providing the level playing field for Pos, cooperatives, farmers and agro-businesses to thrive in the produce sector of the Sierra Leone. He furthered that through several projects including the Agriculture for Development project, the Ministry of Trade and Industry (MTI) and the Ministry of Agriculture Forestry and Food Security (MAFFS) have been working together to help farmers form cooperatives and Agricultural Business Centers (ABCs) and also provide the necessary support for them to be able to compete with other businesses in the commodity market.