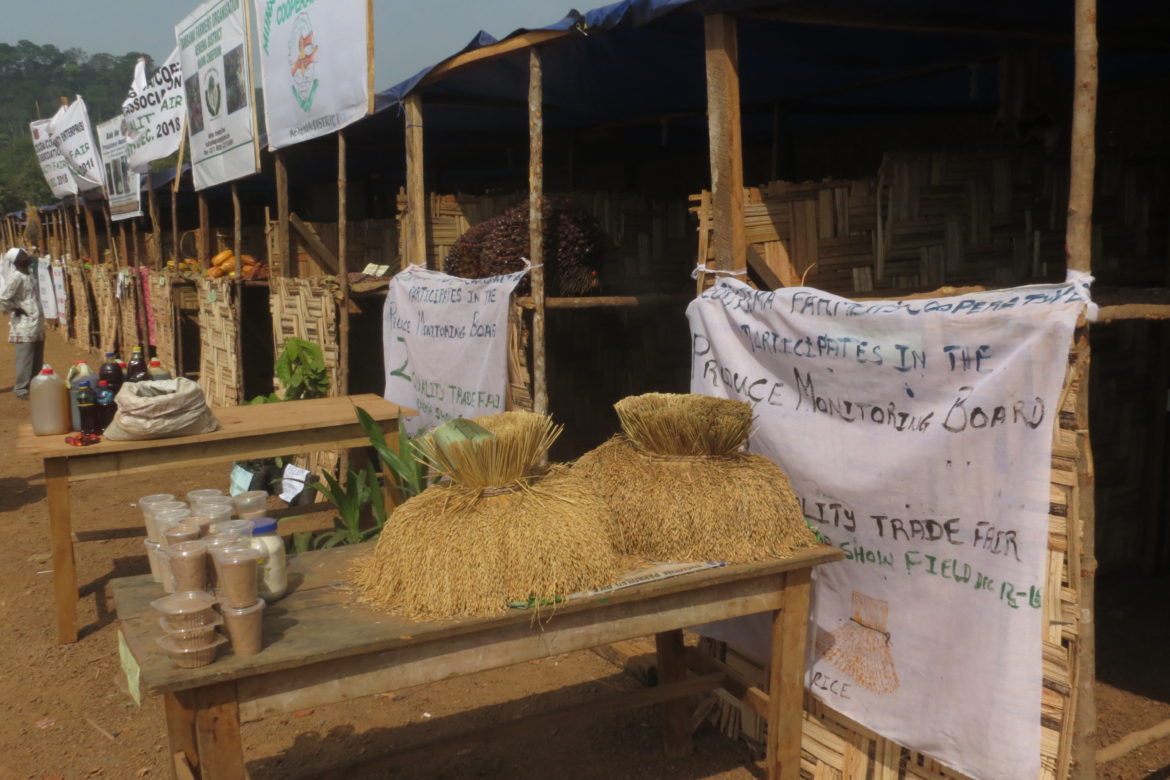 The Chief Minister, Prof. David Francis has on the 17th December 2019 attended the Third Quality Produce Fair (QPF) in Kenema which showcased the best of the country’s farming enterprises and produce.

Speaking on behalf of President Bio and the agriculture ministry, the Chief Minister said the Government of Sierra Leone is determined to transform the agriculture sector and restore food self-sufficiency in the country.

The Chief Minister said that the Bio-led government is committed to supporting farmers and their operations across the country, in order to empower rural farmers to export their produce. ‘Apart from the free quality education, the government’s second priority is agriculture’, he said, adding that ‘A country will never develop if it fails to feed its people.

The Chief Minister added that as a show of his commitment in promoting agriculture in the country, the President Dr. Julius Maada Bio was in Kenema last year, for the first time after his 2018 elections victory launched the Quality Produce Fair (QPF).

He added that the annual agriculture produce fair aimed at showcasing the hard work of farmers, giving excellence to those with quality harvest and motivate others to emulate the winners.

The Minister of Trade and Industry, Dr. Edward Hinga Sandi and his Deputy Minister, Rev. Abraham Sesay-Jones spoke on the significance of farming in Sierra Leone, especially growing cash crops which has helped in the development of countries economy such as Ivory Coast and Ghana.

Both Ministers pledged Government’s continuous commitment in supporting agriculture that will enhance food self-sufficiency as well as promoting economic diversification and employment.

The Executive Chairman of the Produce Monitoring Board, Dr. James Vibbi said that the theme ‘Quality Produce for Sustainable Development’ was carefully selected because PMB and its partners believe that without quality produce there would be no value-addition.

He therefore encouraged Farmers to ensure quality on their produce and also urged them to register their businesses with the Government.

The Cocoa of Excellence Award was given to Sahr Bangura from Kono as the best farmer in Sierra Leones. Presenting the award to Sahr Bangura on behalf of the Governments, the Chief Minister congratulated Mr. Bangura for making Sierra Leone proud. He encouraged the farmer to do more urging others to emulate his performance.

During his tour on the various farm stalls, the Chief Minister visited the Sierra Leone Standards Bureau, where he said: ‘Our Government takes the Bureau very seriously because we cannot achieve quality export without conformity’.

The distribution of 2nd Quality Produce Fair award prices brought winners from the three districts in the East (Kenema, Kailahun and Kono) in Kenema and winners from three districts in the North (Kambia, Port Loko and Bombali) in Kambia to receive 50% of their winning package. In various meetings cooperative farmer representatives, stakeholders from various MDAs – MAFFS, Coopi, Kenema City Council, Kambia District Council, Exporters and others were to grace the hallmark event.

The Regional Manager East Mohamed Kallon welcomed and congratulated the award winners for displaying quality produce in the last 2018 Quality Produce Fair of which they will awarding prizes. He also acknowledged the efforts of other members in the Produce value chain and encouraged them to work in partnership to enhance the quality of the commodities that they produce in conformity to international standards. He spoke of the cordial relationship that PMB has with members in the Produce sector in the Eastern region which has contributed significantly to the smooth work of the institution.

The Administrative Manager Ibrahim Fofanah gave a background to the award of the prices to winners. He said the award of prizes to deserving farmers started in 2017 when the Produce Monitoring Board had its first Quality Produce Fair in Bo Coronation Field, Bo City.

He said from past experiences giving monies as award prices had brought so much controversies among cooperatives which had led to disintegration and therefore to ensure sanity PMB believes to provide items that will be much relevant to the awardees.

He said a need assessment was done to identify the felt needs of farmers so that PMB will be able to respond to some of the challenges faced by farmers in their farming activities. He said as a way to ensure sanity, PMB procured agricultural tools together with bags of rice (Food for work) for the winners of 2018 Quality Produce Fair together with transport refunds as an aid to facilitate their movements. Among the items that were distributed were; shovels, head pans, wheel barrows, cutlasses, mattocks, rubber drums, jelly cans, scarpering basket among others.

Mr. Fofanah stated that the Quality Produce Fair is a platform that promotes production and value addition in the produce sector.

He added that the QPF also creates a market platform where buyers and sellers meet and conduct business.

Mr. Fofanah informed the gathering that a farmer Sahr Bangura has won award twice in the 2017 and 2019. He said Sahr Bangura’s sample which represented Sierra Leone was selected among the first 50 best samples that were submitted by 166 countries around the world. He said the Executive Chairman Dr. James Vibbi and the Director Mr. Diddan Sankoh will be leaving the country to accompany Sahr Bangura to France to receive the Cocoa of Excellence Award.

Mr. Fofanah added that the performance of Sahr Bangura from Kono district have sets the pace for other farmers to follow and it should also serve as motivation to other farmers in working towards sustainably improving on the quality of the agricultural commodities they produce. Mr. Fofanah acknowledged the cooperation of farmers and partners to the success of the 2018 Quality Produce Fair and expressed the hope that this year’s quality fair will be more successful.

The Chairman of the Agriculture Committee at the Kenema City Council Sheku Kallon expressed thanks to PMB for the awards given to farmers which he said is complementing government’s efforts in promoting agriculture in the country. He encouraged all present for the meeting and especially the people of Kenema to embark on agriculture as it is the backbones of our country’s socio- economic development.

The Chairman of the Development Committee at the Kenema District Council expressed delight for such event noting that it will motivate other farmers to prioritize farming which is line with the President’s priorities. He registered his council’s commitment to work with PMB and other line Ministries to promote agriculture in the country. He made references to other countries such as Ghana and Ivory Coast that have taken the lead in promoting agriculture which have contributed immensely to the development of their countries. He called on farmers to embark on mechanized farming so that production and productivity could be increased significantly.

Mr. Amin Skaikay who represented produce exporters expressed delight for the award given to the winners. He noted that it was his first time to be invited to such an event and he stated that such awards will boost farmers’ ability to produce and processing quality agricultural as farmers received nursery establishment materials, production tools and processing equipment. He said the awards will motivate more people to engage in farming and improve on quality. He recommended that an agricultural laboratory be established to look into developing improved varieties that will distributed to farmers so that the country’s output will increase significantly.

He donated one hundred and fifty thousand Leones (Le.150, 000) to each award winner in addition to the transport refunds which was provided for each farmer group by PMB.

A beneficiary from the Gao Farmers’ Cooperative who won the 1st position for the best quality cocoa producer from Kailahun Enatorma Kallon expressed thanks and appreciation to PMB and the government for the awards given to them. She said the award is a big boost to enhance their production and noted that the cooperation of their farmers earned them the award and she promised on behalf of members of her cooperative to continuously work towards improving quality on their produce.

In Kambia the Senior Accountant Ahmed Mannah said the first trench of the prices is 50 % representing the sum of over fifty million Leones. He said the funds are provided by government through the Ministry of Finance. He said there were eight categories of winners but because of limited financial position of PMB they were prioritized in terms of the categories that will receive award prices limiting them to cocoa, coffee, cashew, rice and palm oil.

The Administrative Manager Ibrahim Fofanah said Kambia district has the highest number of award winners three of them are Cashew Producers and two Palm oil Producer. He said Kambia is doing well in cashew production and acknowledged the support of the Ministry of Agriculture, COOPI and other partners in the production of cashew in that part of the country. Mr. Fofanah said the cashew sector has a brighter future for the North/ North Western region of the country and therefore urged farmers to make good use of the opportunity.

Responding, the Administrative Manager Ibrahim Fofanah told the National Coordinator NAFFSL that it is prudent that the PMB is incorporated into all their planning stages of the Kambia Trade Fair so as to avoid conflict with the two dates as PMB is also in consultation with top Management of the Ministry of Agriculture on the 3rd Quality Produce Fair.

The representative of COOPI Mohamed Kamara spoke of their role in supporting farmers in cashew production across the country. He said COOPI has been providing farming materials to farmers but realized that some farmers are not utilizing the materials properly. He expressed thanks to PMB for the support given to Farmers and registered his organization’s commitment to monitor the farmers so that the items are used for its intended purpose. He expressed thanks to their donor European Union (EU) and pledged his organizations’ continuous support to the agriculture sector in the country.

The Ag. District Agriculture Officer applauded PMB for fulfilling their promise and called on the farmers to put more efforts on their farming activities, their community and the country by extension. He said collaborative efforts is important in boosting Agriculture in the country.

The Regent Chief Rokupr Abdul Kamara also expressed thanks to PMB and the Ministry of Trade for supporting farmers of the Kambia district. He stated that one of the biggest challenge that Kambia district is faced with is bush fires that usually destroy their farms. He said bush fires are stifling cashew production in the district. He called on PMB and other relevant authorities to develop and implement policies that will regulate farmers on bush fire.

The Administrative Manager told the gathering that PMB will be reviewing CAP 185 of its document and will be having consultations with relevant authorities on how it can be incorporated into the document but as a quick measure they will take it Management.

The Regional Manager North/North West Brima Turay spoke of PMB’s role in promoting agriculture in the county. He said the Produce Monitoring Board has been supporting farmers with trainings. He added that ginger input was the first support that PMB gave to farmers in Kambia district and ever since the institution has been working with farmer groups from various chiefdoms.

He said he will ensure that PMB’s work in the district is optimized in all chiefdoms. Mr. Turay informed farmers that very soon PMB’s Quality Control Officers will be monitoring their farms and they will be providing extension services as well.

One of the Awardees from the Massimera Multi- Purpose Cooperative Mariama Bangura expressed thanks to PMB and the government for the support noting that the support from PMB has motivated them and other farmers to enhance quality on their produce.

The distribution of prizes were done at PMB’s offices in Kenema and Kambia.