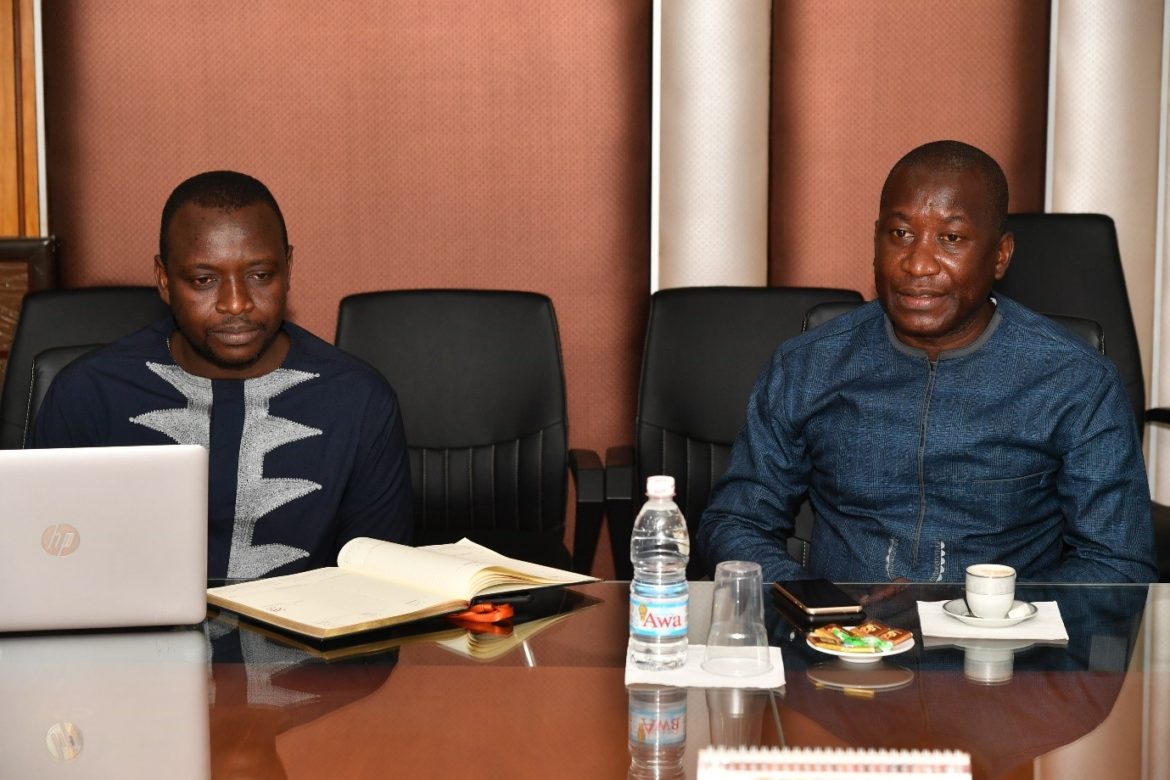 With funding from the World Bank through the Smallholder Commercialization and Agribusiness Development Project (SCADeP), the Executive Chairman of the Produce Monitoring Board (PMB), Dr. James Vibbi and the Head of Operations Didan Sankoh have held learning and investment partnership engagements with two large companies, Olam International  (https://www.olamgroup.com/about-olam.html) and Africa Sourcing (http://www.africasourcing.net/ in the cocoa, coffee and cashew sectors and the Le Conseil du Café-Cacao (Coffee-Cocoa Council) of Cote d’Ivoire (http://www.conseilcafecacao.ci/) These engagements were held from Tuesday 23rd April to Friday, 26th April 2019 in Abidjan, Cote d’Ivoire.

On Tuesday, April 23rd the team held promising discussions with Olam International on the huge potentials that Sierra Leone offers in the cocoa, coffee and cashew sectors. Giving an overview of PMB, the Executive Chairman of PMB, Dr. James Vibbi told the Olam International team that PMB was established by an Act of Parliament in 2013 with the mandate to regulate, promote and improve the marketing of produce in order to optimize the export earnings of farmers; encourage the production of quality produce which meet international standards; initiate and encourage the processing of produce with the aim of adding value to them for export and for local consumption; facilitate and encourage scientific research aimed at improving the quality of produce; regulate the internal marketing of produce; secure the most favorable arrangements for the grading, sealing, certification and sale of produce on behalf of exporters; cooperate with other stakeholders to institute measures to eliminate the smuggling of produce and assist exporters of produce to find markets and provide other relevant information and assistance to facilitate exports.

On the request to invest in Sierra Leone, Mr. Konate noted they are keen to expand their investments to other countries and the fact that Dr. Vibbi was proactive to reach out to them (Olam) on the potentials Sierra Leone offers in the cashew sector, shows how committed he is. Mr. Konate and team agreed to visit Sierra Leone in August 2019 to do market research to have first-hand knowledge of the cashew sector in Sierra Leone and the investment potentials. “For every country we intend to invest in, we first send out a team to such country to have meetings with the relevant stakeholders, including government, farmers, local leaders etc. to ensure we have all the necessary information before investing. So, we will first make a visit to Sierra Leone and you will show us the way as the regulator of the sector in Sierra Leone”, Mr. Konate noted.

On Wednesday, April 24th, 2019 the PMB team also met with Africa Sourcing. During the meeting, Dr. James Vibbi gave an overview of the mandate of PMB and the investment potentials in the three crop areas. In his response the Managing Director of Africa Sourcing, Mr. Ismael Kone noted that his company works on cocoa, coffee, cashew and maize and that since 2002, his company has been a major exporter of Ivorian cocoa beans and that their annual purchase and export account for 70,000 tons of cocoa beans, and that these cocoa beans are sourced mainly from the west and eastern parts of Cote d’Ivoire. He also noted that they have a strong network of cooperatives and are very present and active in the principal cashew production areas such as Kothogo, Dianra, Sequela, Tanda etc. The Director of Export, Mr. Thomas Kouame said that they will be happy to extend their investments in Sierra Leone if the right investment climate is available and if there is a dedicated team to support a trade mission to Sierra Leone. In his response, Dr. Vibbi noted that the investment climate in Sierra Leone is improving rapidly and the Government of Sierra Leone is very deliberate in its efforts to ensure investors do their businesses smoothly by providing them the support and enabling environment. The Managing Director, Mr. Kone noted that they will sit as a team to put together a trade mission that they will send to Sierra Leone to get a deeper and first-hand understanding of the investment potentials before the end of 2019. He noted that the engagement between Africa Sourcing and PMB will continue and that PMB will be part of the planning for the trade mission as they (PMB) will be the host for this mission to Sierra Leone.

In all the two meetings with Olam International and Africa Sourcing, Dr. Vibbi intimated the management of both companies that the investment climate in Sierra Leone is improving rapidly and that there are huge acreages of land for potential investors to lease and invest in. Dr. Vibbi noted that the Produce Monitoring Board works closely with the Ministry of Trade and Industry, Ministry of Lands, Country Planning and the Environment and the Ministry of Agriculture and Forestry to ensure potential investors in the cocoa, coffee and cashew sectors are provided the support and enabling environment to have their investments protected and profitable. He assured the two companies of his government’s deliberate efforts to support investors and improve trade and investment in the country.

On 25th and 26th April 2019, the PMB team engaged the Le Conseil du Café-Cacao (Coffee-Cocoa Council) of Cote d’Ivoire on learning exchange sessions. During these sessions, Dr. Vibbi noted that for Africa to be a true global trade force, collaboration between and among African countries is key and his agency’s visit to the Coffee-Cocoa Council of Cote d’Ivoire is meant to learn from them critical processes and procedures in the cocoa sector to help improve the Sierra Leone cocoa sector. The Head of Operations, Didan Sankoh presented on the role of PMB, current strategic focus for the next 3 to 5 years, successes, challenges and the key partners they work with, in both the public and private sectors in Sierra Leone. Mr. Sankoh also noted that PMB is coordinating the Sierra Leone Cocoa Coffee Cashew Platform (SLCCCP) which was established with the support of development partners (GIZ, Solidaridad and Welthungerhilfe (WHH). He noted that the purpose of the SLCCCP is to serve as a forum to periodically discuss the various issues

and main barriers affecting the growth and sustainability of cocoa, coffee and cashew production, regulation, marketing and financing, and to enhance information exchange and coordination among stakeholders, engage in advocacy in order to improve and increase production, trade and export.

Dr. Vibbi noted that Cote d’Ivoire is the largest producer of cocoa in the world and it is only prudent that the body that regulates the cocoa sector in Sierra Leone (PMB) engages the body that regulates cocoa in Cote d’Ivoire to learn and share ideas. This meeting was attended by key management staff of the Coffee-Cocoa Council, including the heads of quality control, internal marketing, external marketing, and certification and a lot was shared on what each of these departments are doing. In his response, the head of research, Mr. Nanga Coulibaly who also chaired the sessions noted that they will be keen to collaborate with PMB to lift the cocoa industry in Sierra Leone and by extension in Africa. He noted that agencies regulating the cocoa sector in Africa need to work more closely to ensure Africa has more strength and voice given the fact that Africa accounts for about 75% of global cocoa output, but only enjoys about 5% of the US$ 100 Billion chocolate industry. He noted that they are keen to even sign an MoU with PMB for learning exchange and they are happy to respond to requests for technical support from PMB. Dr. Vibbi thanked the Ivorian team and noted that he will work with his team to put together critical areas of technical support and share with them in May 2019. Mr. Coulibaly noted they will even be happy to send some of their technical staff to PMB in Sierra Leone to work with key PMB staff to improve on their regulatory role and performance to improve the cocoa sector in Sierra Leone. Dr. Vibbi thanked the Ivorian team for the hospitality and for agreeing to support and work closely with PMB to improve the cocoa sector in Sierra Leone.